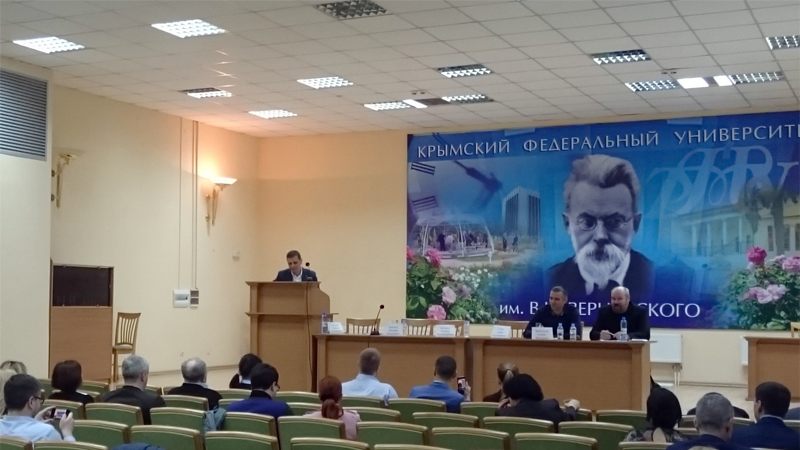 On March 30-31 Mr. Kartsev, General Director of Valrus Ltd participated in the Conference "Regulation of land and property relations in the Russian Federation", organized by the Crimean Federal University named after V.I. Vernadsky "and the "Institute of the Property Appraisal and Finances" with the support of the self-regulating organization of appraisers SMAO.

The main topic of the conference was the state cadastral valuation implemented within the framework of the Federal Law of July 03, 2016 №237 "On state cadastral valuation". The event was held in Simferopol at the Crimean University and was timed to the 20th anniversary of the appraisal company “The Institute of Appraisal’ founded by Prof. Nikolay Volovich , which has a branch in the Crimea, and actively cooperates with the authorities of this reunited subject of the Russian Federation. Among the participants were the representatives of the Rosreestr responsible for monitoring over the implementation and coordination of cadastral assessments, managers and leading specialists of state-financed institutions, including Moscow, the Leningrad Region, the Ryazan and Tula Regions, the Krasnoyarsk Territory, Tomsk, Yekaterinburg, Krasnodar, Crimea, Sevastopol and many other regions.

Formal reports about the event can be found on the Internet, there is a small video report in the news, but we will try to say a little bit about the issues discussed.

1. Currently the state cadastral valuation is conducted in about 30 Russian regions. Moscow conducts valuation of land and property as of January 01, 2018, the Moscow region - all categories of land (valuation of properties will be performed later), the Leningrad region in 2018 is still being prepared and the valuation will be conducted as of January 01,2019, several regions start with something simple.

2. A cooperation with the authorities and the Rosreestr is being worked out so far. Arisen dispute during the discussion about the procedure of unloading the list of land sites and properties to be assessed was notable.

3. Common problems of all state-financed institutions: a lack of information about the properties and/or its low quality, including a lack of data that allows to link the buildings to the land sites (coordinates or location), an unnecessary information, a lack of qualified personnel and low wages, enabling to keep employees.

4. Some provisions of the Guidelines for Assessment require further development. A number of employees of the state-financed institutions admitted that at present some of the provisions can’t be implemented and another part is not carried out consciously.

5. The issue of VAT including in cadastral value has not been clearly resolved. Most experts support the need to calculate and report the cadastral value excluding VAT, but a number of entities and the Ministry of entities and the Ministry of Economic Development in fact 'blur' the issue.  The issue of VAT was separately brought up in the resolution of the Conference in order to send a request and receive appropriate explanations from the Ministry of Finance of the Russian Federation.

6. Requirements for the qualification and education of employees of the state-financed institutions have not yet been clearly formed. It is necessary to develop professional standards and then educational standards for them. At the moment there are no uniform requirements and training programs.

7.  The procedure of the assessment appeal in common is remained in the same form. The participants of the event expressed the preferences for maintaining the pre-trial procedure and synchronizing the composition and order of work of the current and future State Commissions in each region of the country.

Besides the assessment appeal of the approved valuation it is possible to clarify the figures until the establishment of the results. So, firstly, the owners can submit to the state-financed institutions a declaration with full information about the properties, including the type of use and structural and technical survey and other parameters.

We would like separately to emphasize on the valuation of real estate in Moscow.

1. Officially the work was started a few weeks ago (although in fact the preliminary list of land sites and properties to be assessed was unloaded at the beginning of the year). The appraisal is planned to be done within a short terms, the preliminary results will be ready by June.

2. Basically, everything will be valuated using statistical modeling methods. But, as I understood, the calculations are going to be done almost in excel. Models will be similar to those that were, but there will be added a number of new factors. For land plots it is to be considered such a parameter as acceptable/average density if construction (thus, to raise the land appraisal in Moscow City and in other densely built-up blocks). To provide apartments on the first floor for living separately.

3.  An individual assessment even for the largest properties is not planned, neither using their own efforts nor with the involvement of contractors. I.e. it's not planned in the cadastral valuation, although my opinion is that most likely the Сity Property Department, as it was before for its own budget,  will order about 20-50 reports on key objects to check their quality of models.

4.  It's not planned to take into account the result of the assessment appeal within the previous round as well. Thus, most likely the patterns will again work poorly on business centers in the unreconstructed lofts with good location, but  with low quality, as well as properties located in industrial zones, etc.

In the current situation, it should be understood that state authorities hardly likely to set a task to reduce valuation and consequently to low taxes. Most likely, on average, the results will be at the level of the past, only they will try to redistribute them to larger and underestimated properties.  In particular, a lot of work continues on clarifying the data on the assignment of real estate, transferring them from the group "other" to the relevant commercial types.

In conclusion it would be desirable to tell about the organization and perception of the conference. Everything was wonderful. In contrast to our just breaking spring the warm Crimean air, as mostly noted was quite dry, especially in the morning, it contributed to a positive friendly atmosphere. In addition to exchanging information and interesting professional discussions, we managed to rest and congratulate the company of Nikolay Volovich with its anniversary, go on an signseen to Bakhchisarai (and someone managed to get to Sevastopol and Yalta). We want to express our gratitude to the organizers for such useful and interesting event.